Four Directions Teachings is an interactive site detailing the knowledge and learning of native and Indegenous People. The addministrators of the site have graciously shared their passion and knowledge with us. Please visit thier site by clicking on the link below:

The Medicine Wheel – by Francis Whiskeyjack 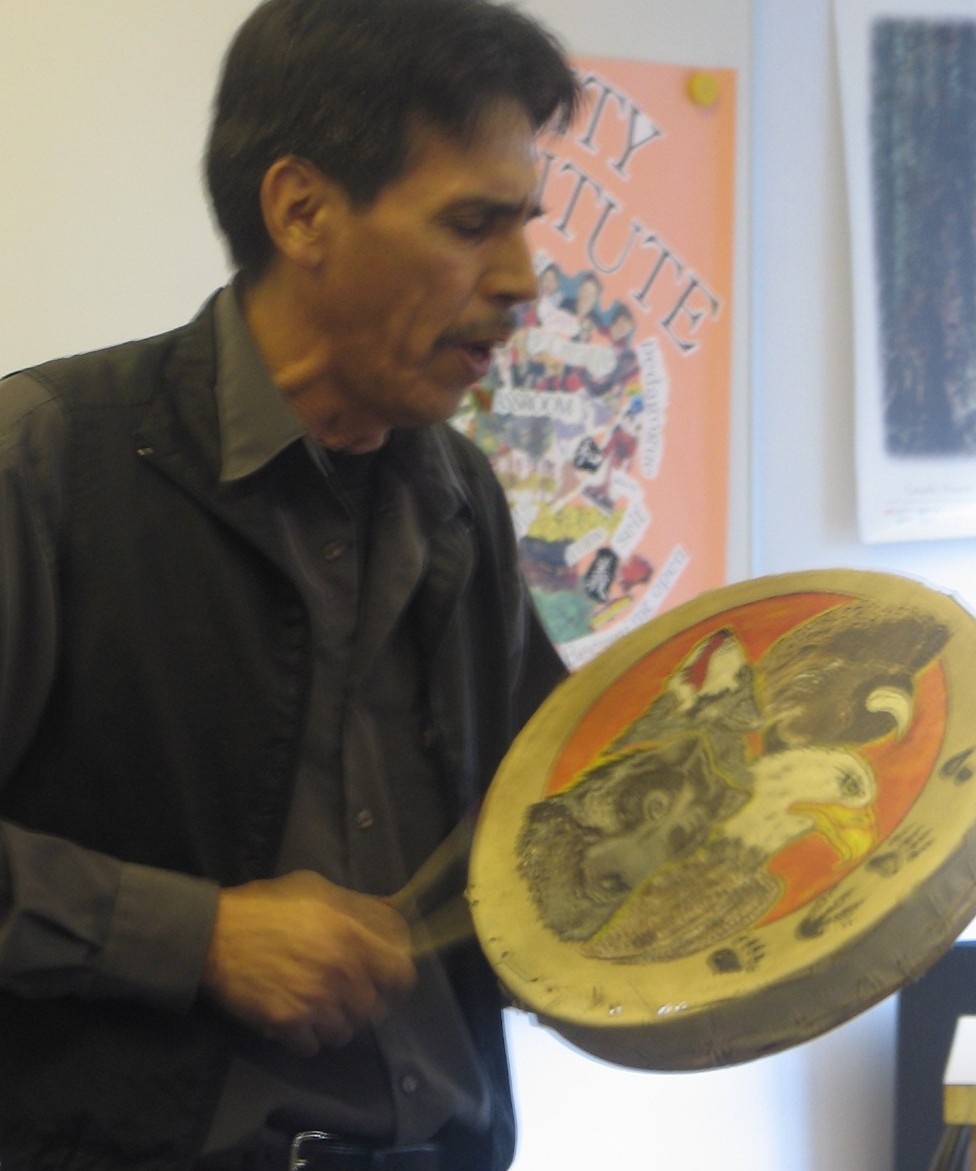 Whiskeyjack, who was born and raised in Saddle Lake, Alta., credits the medicine wheel as being one of the positive forces in his life. In his own words, this is his interpretation:

“I’m not saying that this is the only way to do to the medicine wheel, but this is the way I do mine. These teachings are based on the teachings I received from people in the area that I come from. Many people have different interpretations in their medicine wheel and they are all right; no one is wrong.

In the center of the circle I like to put the Creator’s name, because without the Creator nothing would exist. The wheel has always been in direct relationship with the Creator. Right under the Creator I put me, because I need to do things for myself in order to make this wheel work. Within the circle are the four quadrants or areas. A lot of people know them as the four directions. The number four has many significant meanings for the Aboriginal people. Within the four directions there are all the sacred teachings of four.

“In the universe there are four directions – east, south, west and north. There are four winds; four seasons – spring, summer, fall and winter; four races of people – the oriental, the red man, the black people and the white people; four types of creature that breathe – those that fly (birds), those that are four-legged (the buffalo), those that are two-legged (man) and those that crawl (insects).

“There are four elements on earth – wind, fire, water and air. The directions used in the wheel are always used in a clockwise direction because that is the way the sun moves, rises and sets. First of all I’m going to put in the quadrant, which is the east, we were born physically. We are babies then. Our physical selves begin when we are born.

“Then we go on to the next quadrant which is the south, on to the mental area…when we get to the teenage years we start to use our mind a lot more.

“We get to the next direction which is the west, where there is the emotional part of things…sadness or hurt is represented.

“The last link in this fourth quadrant is the spiritual self. When people get older they tend to get more into their spirituality. A lot of times we may be taught spirituality when we are younger, but we often feel that we do not need it then.

“The medicine is also about relationships; How to make things work between you and other people. There has to be a balance in every person’s life. When there is balance, people have harmony. There has to be balance in the four quadrants as well. Everything in the wheel has a relationship with each other. There is no harmony if all or one of these is not balanced. People may experience a certain amount of peace and harmony if one area is affected; however it won’t last long.

“When we talk about the physical quadrant, we are talking about birth. I’d like to think about birth as being a new day so this would be the sun. For everyone, the sun means warmth and light. The sun begins its new day in the direction of the east. That is where the sun rises… as the sun gives birth to a new day, we think about birth. We can also think of birth as a season, which is spring. When you think of spring you think about what it brings for the new seeds. I’d like to think about it as a new birth, a new beginning. Even among men and women in their journey as a married couple, when they get together, they produce children. From spring comes all new life.

“From spring in the east, we will go on to the south quadrant which is summer. Summer represents the teenage years. At this point the seeds have grown from babies to teenagers. The next stage of the medicine wheel after south is the west, which would represent the fall season. The teenagers then become adults and are represented in the west quadrant. The north, which represents the season of winter, represents the Elders. Eventually the adults become older men and women and, of course, become grandfathers and grandmothers. The legacy continues on. The seeds are carried on throughout the life cycle.

“Even after the Elder has passed on the seeds, the old people are still within us. So this brings about the whole growth process. When we look at the wheel in the way of colors, we look at the sun, we see the light and we can identify it with the color yellow. The south makes us think about red clay and the spilling of the buffalo blood, which is red. To the west we look at the trees, so I’m going to use the color green for the west. When we go to the north, we think of winter and, of course, everything is at rest. The color of the north is white because the Creator in his wisdom covers everything with a white blanket, so that the seeds will remain alive and then regenerate in the spring.

“When we think about the sun in the east, we see the eagle spirit. The eagle is a sacred symbol in the Aboriginal communities because it is the only living creature that naturally flies closest to the sun, therefore, the Native people believes that the eagle is a messenger for the Creator. It brings good messages to the Creator. This is why a lot of eagle feathers are used for doctoring. The eagle uses the air, which is the wind spirit, to get close to the sun.

“Coming from the east, in the direction of the sun, we go onto the south direction. I like to put the buffalo spirit in the south direction because the buffalo represents offerings. We associate the buffalo with offerings because in the old days it offered its life for the livelihood of our Aboriginal people. When we killed a buffalo we used almost everything of its body. We made our clothing, our shoes, and our utensils and got our food from the buffalo. So when we talk about the buffalo giving its life for us, we think about community. Why I say this is that when you think the grandfather buffalo we think about its life and death here on earth. So when you offer something to the Creator and pray, good things can happen. The buffalo showed a lot of courage and love to die for us, so I like to think that love belongs in the south direction.

“One of the natural things for a buffalo to do for its young is to protect it. Whenever the buffalo are in danger, the herd places all of its young into a circle and then surrounds the circle. They offer their lives to protect their young and that to me is showing a lot of love.

“Today a lot of offerings for ceremonies come in the way of broadcloth prints. Whenever we talk about the broadcloth, we are talking about the buffalo spirit. The cloth has actually taken over from what the real offerings in ceremonies used to be. Long ago, berries and meat were used as offerings. Offerings can also be used in memorial fests, to celebrate weddings, to seek wisdom from Elders, a sun dance, a sweat or to celebrate with visitors. This is the way of offerings nowadays.

“In the four directions we look to the east and see the eagle representing the things that fly, all the birds that fly. When we go to the next direction, which is the south, we think about the things with four legs, as in the buffalo. We then go to the west where we can think about the two-legged ones, which are the bear and us. Even though we have the wolf with four legs in the north, we also have represented in this direction those that crawl on the ground or swim. All of these are related in the medicine wheel.

“Now as we move onto adulthood in the west, we go into human emotional feelings. When we look to the west we see the mountains. From the mountains comes out strength and endurance. Out of the mountains come plant life, the trees and things like growth. When we think of the trees that go straight up and tall, it means honesty. When you are straight you are honest. Son in the west quadrant we learn about honesty. This is the quadrant from which the stem of the pipe comes from. Many teachings of the pipe will teach you that the stem of the pipe is considered honest because it is made straight.

“From the plants and the herbs in the west come medicines. So therefore when we light the sweet grass, which we take right from the plants, from the plant life, we burn it and it heals us inwardly. In a symbolic way we are healing our minds and our bodies when we light the sweet grass. Were also asking the Creator to heal our emotions and our feelings. As we share in the circle with our spirit guides, the helpers, our grandfathers and grandmothers, to pray for us, to be mediators and to help us. So this is one of the uses of sweet grass medicine.

“The other things we use are roots, which incidentally are becoming lost now. Years ago, a lot of the medicine men and women knew the roots. They used the roots to heal natural diseases such as cancer or diabetes and other sicknesses. Today we do not have very many Elders left who know how to make medicines and how to use the roots. It is now becoming a lost art.

“So already when you look at this diagram, we think of balance and harmony. We start to see that if people worked together in this circle, everything will be balanced. If one side of the circle does not co-operate with the other side, then you have unrest and wars and there is no peace and harmony. That is why the oriental people, black people, our white brothers and sisters, talk about world peace, because there is so much unrest in the world. There is little balance in the world because we as humans can’t seem to get along.